Before agreement on the advance payment, businesspeople need to consider it not only as a contractual risk but also from a regulatory compliance perspective.

Under the Regulations on “currency operations of residents of the Republic of Azerbaijan in foreign currency, and non‐residents in national and foreign currencies”, approved by the Decision of the Central Bank of the Republic of Azerbaijan, dated 28 November 2016, in case of an advance payment a document confirming import of the goods into the country (customs declaration) or a document confirming provision of the services (handover and acceptance certificate) need to be submitted to the bank. If these documents are not submitted to the bank within 2 years from the moment of the payment, or the pre-paid amount has not beed repaid, then the bank must submit all documents related to such advance payment to the Central Bank.

A local company in Azerbaijan entered into an agreement with its foreign counterparty and made a pre-payment in the amount of 100.000 USD without a bank guarantee. During the pandemic, both parties agreed in writing to terminate the agreement due to force-majeure and the foreign company undertook to repay 100.000 USD to the local company. Because of a failure to repay the pre-paid amount, an Azerbaijani company filed a claim in the courts of foreign jurisdiction where its claim was fully granted against the foreign company.

Thereafter, during the enforcement phase, the officer of the foreign entity was subject to a penalty due to failure to enforce the court decision.

So, Azerbaijani company has never received its money back. In addition to its contractual risk Azerbaijani company faced a regulatory compliance risk where the regulatory authority issued a protocol on administrative offence and submitted the same to the respective court. There was a penalty risk up to 30 % of the pre-paid amount.

Although formal wording of the above provisions do not envisage circumstances in which a person is excluded from the liability, the Constitutional Court interpreted (which interpretation is binding in nature) Article 430.4 of the Code on Administrative Offences and in its Decision dated 28 February 2020 stated that import of the goods or provision of services may be subject to delay for the reasons out of control of a person (for instance, force-majeure, accidents, customs control/inspection etc.). Therefore, the courts should take into consideration all circumstances of the case that may exclude a liability of a person.

Recently, we represented our client in the court on the same subject-matter where our objection was fully granted and the court terminated the proceeding on the administrative offence.

Conclusion and our recommendations

To sum up, an advance payment without a bank guarantee is double-risky. It creates not only contractual, but also regulatory compliance risks. To avoid this risk, it is advisable to make an advance payment only based on a bank guarantee in the equal amount, so in case of any contractual breach a suffering party could be able to fully receive its money back. We also recommend to engage a professional lawyer in case the regulatory authority commences administrative offence proceeding.

About the author: Fuad Gashamov is a professional lawyer with over 12 years of experience in consulting industry. He mainly specializes in dispute resolution, real estate, contracts, regulatory, intellectual property and compliance. He is the founding partner at Legalize Law Firm. He is the member of the Bar Association since 2014. For more information about the author please see the following link: https://legalize.az/en/team/fuadgashamov 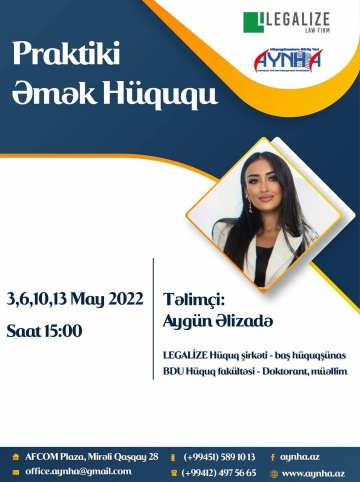 What should an entrepreneur pay attention to in a trademark?

When creating a trademark, entrepreneurs in many cases do not take into account the requirements of the relevant legislation on trademark registration.One of the common cases in practice is that the trademark is already well known on the market, the entrepreneur has not yet registered it, submits an application for registration a little later than the start of activity, and when applying for registration is denied due to non-compliance with the relevant requirement.What should an entrepreneur pay attention to when creating a trademark?Words, personal names, letters, numerals, figurative elements, shape of the goods or their packaging, combinations of colors as well as any combination of such signs may be registered as trademarks.A purpose of the trademark is to distinguish goods or services provided by one entrepreneur from goods or services provided by another entrepreneur.A trademark consisting of a word conditionally refers to the name of the enterprise, surnames, names, other words or set of words, advertising labels. Icons consisting of words processed in standard fonts can be used in any graphic spelling, but if the sign is indicated in unusual fonts that are not used or unknown in the country, its transliteration and translation into the state language or etymological explanation is required.In what cases may the trademark registration be refused?We inform entrepreneurs that they will be refused from registration of the following trademarks:Signs that are to designate the kind, quality, quantity, intended purpose, value of the goods or services or their other characteristics and also place of origin of the goods and the time of their production;Trademarks which are not related to the origin of wines and spirits, but contain a geographical indication identifying them;Signs that are consisted of expression that are contrary to public order, morality and ethics, of any elements that can inflict damage to the reputation of the personality, religious and state symbols;Trademarks which consist exclusively of signs or indicators used in the trading activities of the Republic of Azerbaijan for many years;Trademarks that may confuse the consumer, notably as to the nature, quality or geographical origin of the goods or service.In case of refusal of registration, the entrepreneur is either forced to change the already well-known sign, or does not change and continues to use it without registration. In this case, the entrepreneur may face certain business risks in the future.For this reason, entrepreneurs are advised to take into account the requirements of the relevant legislation before creating a trademark and reduce the business risks that they may face in the future.About the author: Emin Musayev is a lawyer who specializes in intellectual property, contracts, and corporate law and currently works at Legalize Law Firm. For more information about the author please see the following link: https://legalize.az/team/emin-musayevhttps://www.azernews.az/region/194977.html

How the legal strategy can help to successfully implement the business strategy?

https://www.azernews.az/business/196053.html A business strategy is a powerful tool for helping entrepreneurs to achieve their business goals. A good strategy includes plans in relation to the products or services, assets, customers, suppliers, employees, business partners, government organizations, financial institutions, trademarks, competitors and so on. If the businesspeople plan to successfully implement the firm’s strategy, then they need to consider legal aspects of the above matters. In other words, without having the proper legal strategy implementation of the business strategy will not be effective.Products/ServicesBefore the businessmen make a decision as to which products and/or services they will provide to customers, they need to consult with a lawyer and the list of products and/or the scope of the services require a legal review.For example, a company provides repair and maintenance services of equipment to be used in oil and gas industry. Depending on the type of the activity, the company may need to obtain a license. If the company fails to obtain a license where it is required and continues to carry out its operations, there can be adverse legal consequences such as penalty (depending on the amount of income from the illegal operations), imprisonment etc.Assets/TrademarksThe status of the assets needs to be legally analyzed. What kind of assets does the business have? Are they movable or immovable? Have they been properly registered into the name of the company (whether applicable)? Have the trademarks been registered? How your legal interests over the premises, facilities are protected?All these questions need to be addressed.For example, an entrepreneur decides to start a taxi business. Will he/she own the vehicles or the vehicles will be leased from third parties? Why? What are the legal consequences of each option?Employees/service providersRelations with the employees and/or service providers need to be analyzed beforehand to avoid any future risks. Azerbaijani employment laws set out strict regulations and without local legal experts it is hard to manage employment processes. Depending on the nature of the breach, the legislation sets out administrative penalty, criminal liability and so on. For instance, a company provides delivery services and the management may think that staff may be hired based on the service agreements and not based on the employment agreements (what are the differences between the two?). Before making such crucial decisions, businessmen/managers need to consult with the local lawyers since the approach of the regulatory authority may be totally different.Customers/Suppliers/Business partnersAll related risks should be considered in advance and need to be set out in the contracts. Never use template contracts. It is strongly recommended to use the contracts specifically drafted and tailored for the needs of your company. In case of any dispute, template (formal) contracts may put your company at risk and in an adverse situation. A document turnover of the company requires more legal attention for successful business.Financial institutions/government organizationsWith respect to financial transactions Azerbaijan has strict regulations. For cash flow management the businesspeople do not need only to consult with tax specialists and accountants, but also with the lawyers. For example, making an advance payment may impose both contractual and regulatory risks. When it comes to the relations with the state authorities, it is strongly advised to be represented with the lawyer (for instance, when a company needs to obtain a license/permit, or when a company participates in public procurement process, or when state authority carries out an inspection and in all other similar circumstances).Engaging a lawyer/legal team to the implementation of the business strategy or even in an earlier stage, is the proactive approach which will always add value to the business.About the author: Fuad Gashamov is a professional lawyer with over 12 years of experience in consulting industry. He mainly specializes in dispute resolution, real estate, contracts, regulatory, intellectual property and compliance. He is the founding partner at Legalize Law Firm. He is a member of the Bar Association since 2014. For more information about the author please see the following link:https://www.legalize.az/en/team/fuadgashamov